Fire at Disney parade put out with extinguisher 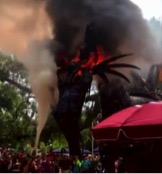 ORLANDO, FL – During Disney’s daily Festival of Fantasy at the Magic Kingdom, the Maleficent Dragon parade float caught fire in front of hundreds of spectators. A Disney spokesperson confirmed that the dragon’s flame throwing mechanism malfunctioned and caught the dragon’s head on fire. Spectators posted videos online showing a park employee using a portable fire extinguisher to spray the flames. Disney’s spokesperson and Orlando fire authorities confirmed that the fire was extinguished before fire fighters arrived at the scene and that the no one was injured as a result of the fire.