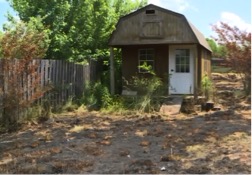 ATHENS, AL – A three month old puppy is being credited with saving the lives of his owners after he woke them up from a nap because their lawn was on fire. According to the family, two of their dogs were sleeping with them, but luckily the puppy was awake to alert them to the rapidly spreading fire. The couple told journalists that the fire was inches from their house, but they were able to use a portable fire extinguisher to put out a majority of the flames. The source of the fire was not determined, but damage from the fire was limited to items in the yard.