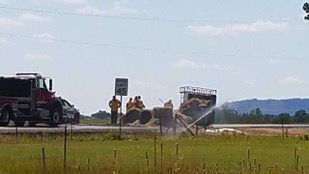 Post Falls, ID — Bystanders in Post Falls worked together to put out a quickly spreading fire caused by a tractor’s trailer breaking. While the driver pulled over when he heard the noise of a part snapping off, he didn’t initially spot the fire and drove away. The honks of other motorists alerted him to the fire. Motorists and a nearby homeowner worked as a team using portable fire extinguishers and a hose to control the fire until authorities arrived to completely put out to flames. All those involved left the scene without any injuries.