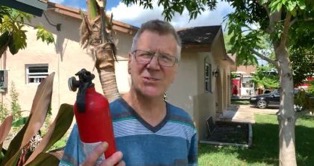 Deerfield Beach, FL- A Deerfield home is still standing thanks to a Good Samaritan’s quick actions after he was alerted to a fire by his neighbor’s calls for help. Once he spotted the plumes of smoke, he swiftly snagged the re-breather mask he uses for his job as a pest control technician and a portable fire extinguisher. Once inside, he found that the kitchen dishwasher was on fire. He smothered most of the flames with the extinguisher until fire crews arrived on scene. There were no injuries as a result of the fire. The Good Samaritan told fire fighters that as soon as they left, he planned on driving “to Costco to get a new fire extinguisher.”